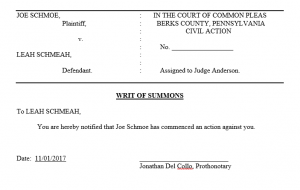 A Writ of Summons is an alternate form of original process in the Commonwealth of Pennsylvania.

A Writ of Summons is an unusual mechanism in the Commonwealth of Pennsylvania that allows an individual to start a lawsuit against someone else without filing a Complaint. Typically, lawsuits begin with a Complaint which lays out all of the grounds on which the lawsuit is being filed included specific allegations of wrongdoing. The Complaint must be specific enough to raise the issues complained of so that the Defendant can respond in an Answer and defend themselves in the lawsuit. However, a Writ of Summons is a second way that an individual can initiate legal proceedings in Pennsylvania. Most states do not provide anything quite like the Writ of Summons. The Writ of Summons need only identify who is the Plaintiff—that is, the person who is suing—and who is the Defendant—the person who is being sued.

The Writ of Summons is frequently used where a Plaintiff believes that he or she has grounds for a lawsuit but is not entirely sure how to prove some of the allegations against the Defendant. In this case, a Writ of Summons can be filed and pre-Complaint discovery can be requested from the Court which allows an individual to find information to support their allegations. For example, if a woman believes she was fired because of her gender, she may not be able to prove this right away; however, if she files a Writ of Summons and requests pre-Complaint discovery, she and her attorney may be able to require depositions of high ranking personnel within the corporation that fired her, or find emails or other documents that could assist in proving her allegation.

Recent statistics demonstrate that, in some counties of Pennsylvania, writs of summons begin more than half of all lawsuits. In other words, this is not a rare occurrence. Writs of Summons have legitimate uses, including preserving the statute of limitations while parties finalize negotiations, allowing for pre-complaint discovery and for other purposes. Unfortunately, some Plaintiffs use the Writ of Summons to avoid explaining their lawsuit, or even to trick a potential defendant into missing the Complaint when filed.

What Should I do If I Receive a Writ of Summons?

You might wonder why you would force them to move the lawsuit forward. After all, forcing the filing of a Complaint will also trigger your duty to answer the lawsuit’s allegations. The short answer is that forcing the Plaintiff to file a Complaint will deprive them of the advantage they sought in filing a writ of summons in the first place. A writ of summons, as discussed above, is filed to avoid having to lay out allegations immediately. Forcing the Plaintiff to do so keeps them on the defensive at the start.

Is There Any Danger in Ignoring a Writ of Summons?

To initiate a lawsuit, an individual must serve process upon the Defendant upon whom they are suing. This service typically must be done by a Sheriff showing up and handing the documents to the Defendant. This places the Defendant on notice that they are being sued. A Writ of Summons must be served upon the Defendant; however, once a Writ of Summons has been filed, other documents may simply be mailed to the Defendant’s address. In some cases, Defendants miss the documents mailed to them, and if they miss a Complaint for 30 days, they risk having a default judgment entered against them—all of the allegations in the Complaint are assumed by the Court to be true, even if this is not the case in fact. Accordingly, once a Writ of Summons has been filed against the Defendant, it is typically wise to force the Plaintiff to file a Complaint and then to file an Answer. In other circumstances, it may be appropriate to reach out to the party who filed the Writ of Summons to see if some grounds for compromise can be reached.

If you have been served with a Writ of Summons in Pennsylvania, you are strongly encouraged to seek legal counsel and to consider what your options are to move the case forward. In some cases, there may be grounds for compromise, while in others, it may be appropriate to file a Praecipe to File a Complaint. Call us today to discuss your options in defending your lawsuit.